History of the Union

(With Excerpts from the 100th Anniversary Program) 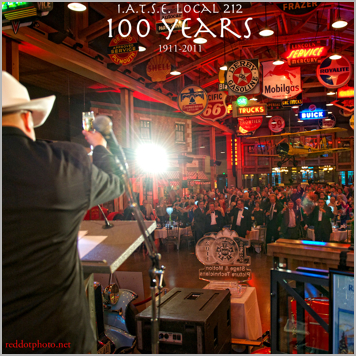 The I.A.T.S.E. began in 1893, when show business was confined almost entirely to the stage. During the next twenty years, the stage carpenters, propertymen and electricians pioneered a drive for union recognition in the theatre - and finally established their craft as one of the highest paid and most respected in America. Then, beginning in 1908, soon after the birth of the film industry, projectionists throughout the continent were brought into the I.A. fold. Again a battle for recognition and top-flight wages was fought and won. Later, in the 20's, union benefits were extended to the Hollywood studios and the vast network of film exchanges throughout the United States and Canada. And finally, as soon as commercial television got a start, the I.A.T.S.E. took its natural place in this newest field of visual entertainment.

Local 212 received its charter from the International Alliance of Theatrical Stage Employees on July 15th 1911, following a period of unprecedented population growth when Calgary had increased by over 1,000% (from 4,400 to 45,000 people). This decade, preceding Local 212's charter, was a time of great optimism as settlers migrated to the west in record numbers on the Canadian Pacific Railway.

There are 18 names that appear on our charter. Many of these inaugural members were immigrants to this country looking for the prospect of a better life. By 1911, there was a well established theatre district along 8th Avenue in downtown Calgary. Local 212's charter members worked at magnificent venues - The Lyric, The Empire and The Majestic and The Grand Theatres.

Early members worked very long hours for little pay. Information gleaned from the 1911 Census and Henderson's Directory tells us that charter-member, Chas F. (Charlie) Hicklin, worked as a stage manager and stage carpenter at the Empress and Lyric theatres for 32 weeks per year at an average of 72 hours per week and earned $600/year. Indexed with inflation, this amount works out to less than $20,000.00 in today's economy. Charter MemberJames (Jimmie/Jim) Silcock served on the Local's Executive Board (mostly as President) for the majority of his 67 years as a member.

At least 5 of our charter members served in World War I and not all of them survived. At our November 2010 Membership meeting, our members paid tribute to charter member Joseph Phelps who fought in World War 1 for the Canadian Mounted Rifles. Brother Phelps died in combat at age 23 on March 27, 1917 and is buried near Calais, France. Some 90 years later, Local 212 members would work on the 20 million dollar, award winning Canadian feature film, "Passchendaele", which gave a great tribute to those who paid the ultimate price.

During the 1930s and 1940s, the Local continued to service a number of theatres as well as the Calgary Stampede. Local 212 membership averaged between 25 and 40 members for much of this period.

In April of 1957, after a 2 year construction period, the Southern Alberta Jubilee Auditorium (SAJA) opened. SAJA is central to the history of our Local as it is a primary facility, hosting a wide range of performances ranging from Community Theatre to large touring productions such as "Wicked". SAJA has been home to the Alberta Ballet since 1966 and the Calgary Opera since 1972. All three organizations currently have collective agreements with Local 212.

Brother Charlie Hansen (gold-card retired member) bears the unique distinction of having served on both the Local's 50th anniversary committee and, as Honorary Chair, on our 100th anniversary. Mel and Barry Merrells also attended both ceremonies.

In the nineteen fifties and sixties, Southern Alberta began to establish itself as an award winning motion picture and television centre. In particular, we became well known for our ability to produce highly popular westerns. In 1954 the Marilyn Monroe and Robert Mitchum classic, "River of No Return", was released. This picture was shot in the Banff and Jasper regions in 1953. Local 212's most senior Member,Mel Merrells, worked under that contract as an electrician. By 1969, "Little Big Man" was shooting in the Morley region. Local 212 Member, John Scott, lists this as his first of hundreds of feature film and television credits.

The nineteen eighties saw film and stage production work increase steadily. The Local continued to build on its world-class reputation by building staging, scenery and crewing venues for the 1988 Winter Olympics.

The early 1990's were a pivotal time in our history as this began a 15 year period of unprecedented growth and organizing within the Local. In 1993, Local 212 was successful in establishing a certification and first agreement with F & D Scene Changes Ltd, currently owned by three long time Local 212 members: Leyton Morris, Bruce Robinson and Dave Stevens. At their peak of production, F & D had 265 members on their payroll and were forced to expand to multiple shops in 2001 and 2002. The success with F & D was followed by certifications at Alberta Theatre Projects (1996) and Theatre Calgary (1998). In 2007, the Local was successful in certifying western Canada's oldest theatre, The Grand, - the very venue our charter members helped to build in 1911.

Since 1948, IATSE Local 212 crews have achieved excellence as Canada's most prolific production centre as measured by award nominations and wins. The Calgary Film commission is able to boast that this jurisdiction had a hand in 48 Academy Award nominations and 14 wins as well as another 92 Emmy Award nominations and 22 wins. Local 212 members have contributed to a record 3 Cinematography wins: 1978 "Days of Heaven", 1993 "Legends of the Fall" and 2010 "Inception". Janice Blackie Goodine, nominated for an Oscar for her set decoration work on 1991's Clint Eastwood classic, "Unforgiven". This Film won 4 Oscars that year, including Best Picture. Local 212 crews also hold the Canadian record for most Emmy, and Golden Globe nominations and wins. In 2005 alone, our members contributed to 36 Emmy Nominations, including 10 wins.

In the last decade, education and training initiatives opportunities have expanded exponentially. As well as offering numerous courses and certification classes for our membership, Local 212 is actively involved with theatre and stagecraft students at Mount Royal University and film and television production students at SAIT.

From our long history with the Calgary Stampede to the impressive and ever growing list of awards and honours bestowed upon our membership, Local 212 has much to be proud of. Our history is rich and storied. The craftsmanship, hard work, and dedication of our membership promise that there is much to look forward to in our future. 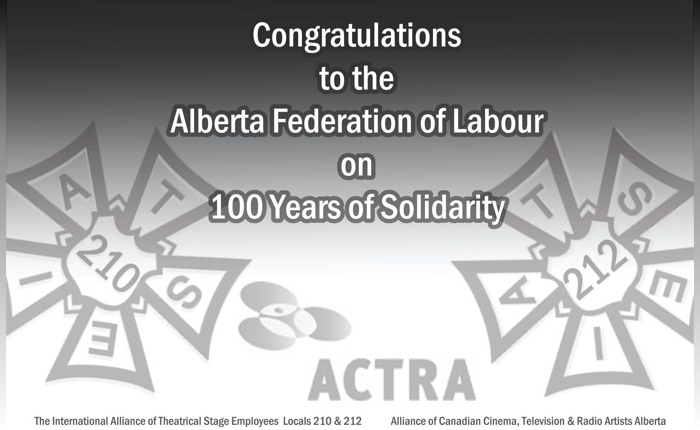